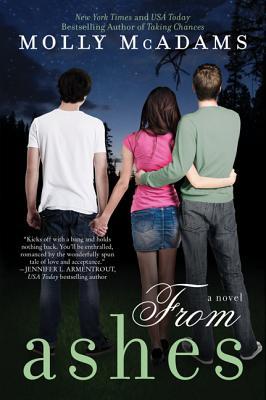 Aside from her dad, who passed away when she was six, Cassidy Jameson has only ever trusted one man: her best friend, Tyler. So of course she follows him to Texas when he leaves for college. She just didn’t expect to be so drawn to their new roommate, Gage, a gorgeous guy with a husky Southern drawl. The only problem? He’s Tyler’s cousin.

Gage Carson was excited to share an apartment off campus with his cousin. He didn’t mind that Tyler was bringing the mysterious friend he’d heard about since they were kids … until the most beautiful girl he’s ever seen jumps out of his cousin’s Jeep. There’s something about Cassi that makes Gage want to give her everything. Too bad Tyler has warned him that she’s strictly off-limits.

Despite everything keeping them apart, Cassi and Gage dance dangerously close to the touch they’re both been craving. But when disaster sends her running into Tyler’s arms, Cassi will have to decide whether to face the demons of her past … or to burn her chance at a future with Gage.

This was really sweet and entertaining seeing what they would do to be together. I like this book of Molly and I don’t normally like love triangles.

“Whoa, got it bad for your cousin’s girl already, huh? You gonna try to get with that?”
I eyed Cassi in Ty’s arms and shook my head as I brought my beer up to take another long drink. “Nope.” Yes, yes, I am.”

The moment Cassi climbed out of Ty’s truck in Texas both she and Gage felt some weird connection that they can’t leave alone. The moment he felt the connection he wanted to be with Cassi but his cousin did not help him because Ty wanted to be with Cassi to. Cassi on the other had just wanted to be with Gage so when Ty thought she might run to Gage instead of him he started lying to both of them about each other’s feelings. Gage thought Cassi was in love with Ty and that they were dating and Cassi thought Gage did not like at all. Ty got so jealous of them that he somehow nearly lost Cassi but that pushing her away pushed her to Gage and they started dating. They both found out they loved each other and that Ty was lying to them. One night at a partying something bad happens and she runs back to Ty not because of what Gage did but because she has to go back to California. She left Gage’s place in the middle of the night with just a note explaining absolutely nothing when Ty found out about her leaving without saying good bye he called Gage to let him know. Ty told him to give her just some space she will come back to him.

“Jake looked at us like we should know this already. “SMB? Sandwich-Making Bitch.”

In California she met this Detective Conner Green and somehow he helped her trough he past and she really liked Conner but she loved Gage. So after a few week in California she went back to Gage but that day she flied back to Texas he went to California to get her and he just about missed her. He thought she left him for good so he went back to her ranch and felt shattered. Everyone was still hoping she will come back. When she got back to their apartment she noticed everything is gone so she got a new car went to pick up 2 good friends hers and went to the ranch. Everyone was so happy that she was back and that she chose to be with Gage for the rest of her life. I adored the ending it was sweet and I noticed in the book how much Gage actually loved her. I really did enjoy the book but still my favorite series of Molly’s is Forgiving Lies.

“She nodded against me. “Do you need me to do anything?”
I didn’t need a thing from her, but I wanted everything. I wanted her to leave Tyler, to love me, to want to live here with me for the rest of our lives. I wanted so damn much.
”Just go back to sleep, then enjoy the rest of the day with the girls. I’ll be back tonight.”
”I’ll be waiting her for you.”
Closing my eyes, I took a deep breath in and held it. if only she knew what she did to me.”

Molly grew up in California but now lives in the oh-so-amazing state of Texas with her husband and furry four-legged daughters. When she’s not diving into the world of her characters, some of her hobbies include hiking, snowboarding, traveling, and long walks on the beach … which roughly translates to being a homebody with her hubby and dishing out movie quotes. She has a weakness for crude-humored movies, fried pickles and loves curling up in a fluffy comforter during a thunderstorm … or under one in a bathtub if there are tornados. That way she can pretend they aren’t really happening.