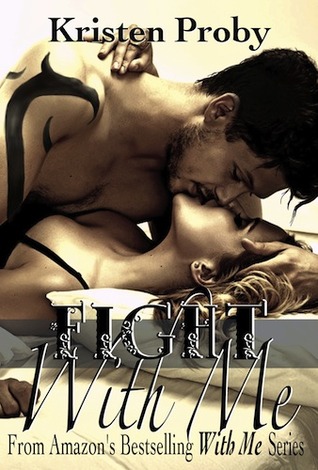 Jules Montgomery is too busy and content with her life to worry about a man, especially one Nate McKenna. If growing up with four brothers has taught her anything, she knows to stay away from sexy men with tattoos and motorcycles. That goes double if he’s your boss. During the one incredible night they shared, he violated the no fraternization policy…among other things, and it won’t happen again. Jules won’t risk her career for mind-blowing sex, no matter how much her body and her damn heart keep arguing with her.Nate McKenna could give a shit about the no fraternizing policy. He wants Jules and he’ll have her. The rules could bend around them, or be damned. He’s not a man to be taken lightly, and Jules Montgomery is about to find out just how he responds to being pushed aside after the best night of sex he’s ever had. She can fight all she wants, but he’ll have her in his bed in the end.

FIGHT WITH ME is the second novel in the With Me In Seattle Series.

This book was Sexy and a whole lot of steaminess. I really enjoyed reading the first book of the series and this book is no less different. Loved every moment of it. With Nate’s intensity that was so damn H.O.T. He can give the best guys in the world run for their money.Jules and Nate was never allowed to actually get together and date because he was her boss and there was a policy at their work against dating co-workers so both of them could get fired if someone found out. Nate did not actually care about that he wanted to be with Jules. She trusted and loved Nate enough that she willingly gave herself over to him and let him take control of their relationship.

“I just had to have the most mind-blowingly fantastic sex of my life with the one man in the world that I just can’t have.”

Jules is a strong independent women who does not need to lean of anyone but sometimes she does need someone and Nate gives her everything she can dream of. They fell in love so quickly but they also nearly lost each other in the end. At least her brothers and family put some sense into her brain to talk to him about what happened in the end. Nate oh Nate he is the definition of intense and raw, masculine power. And yet, he is incredibly sweet. Lethal combination…and Jules comes first for him in everything. What is there not to love about Nate? I loved the part when he introduced himself to her brothers, he stood up against them showing how much he cares about Jules.

“And then you came into my life, and you just blindsided me. I am so fucking wrapped up in you I can’t see straight, and you tell me I’m a caveman for wanting to protect you and that our relationship is bullshit.”

What I like about Kristen Proby’s writing is she makes you feel all of the feelings the characters has. Her books sucks you and only throws you out wanting more when the book is finished. I really was sad when the book ended and this was by far my favourite book of the With me In Seattle series. I’m not gonna tell you any spoilers but you will wish that Nate McKenna was you boyfriend/husband just for a day for what he did to be with Jules and he can be real romantic and sweet.
In short term this book was: HOT. SWEET. AMAZING READ.
Recommendation to everyone that is older than 18 because there is a lot of hot and sexy sex in this book that had me fanning myself.

“No one else will ever know the strength of my love for you. After all, you’re the only one who knows the sound of my heart from the inside.”