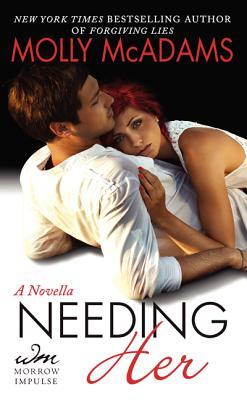 She’s the Girl Next Door

Maci Price isn’t really into relationships. Having four very protective older brothers has always made having a boyfriend very difficult, anyway. But her friend is set on finding her the perfect guy – and thinks the mysterious Connor Green is the perfect pick.

Connor Green is trying to find himself again. He loved then lost and it’s time for him to pick up the pieces. His brooding is making his friends crazy, but, Maci Price, who has grown up into a gorgeous and incredibly sexy woman, is about to break the spell.

They’re Made for Each Other

When Maci starts up old pranks to get Connor out of his slump, an all out war leads to a night that will break all their rules, and a relationship they must keep hidden. Together they’re electric. Apart they’re safe. And soon they’ll find they’re exactly what the other needs.

A fabulous, fun, and sexy, New Adult novella from New York Times bestselling author Molly McAdams. If you loved Connor in From Ashes, this is the story for you.

I really loved this book. It was sweet and romantic and fun with all the pranks and stuff.

I loved this this book so much and I am so happy that Conner found love again. Marci brought out the best and worst out of Conner. He was living in a numb life after he lost Cassidy and he thought he will never have happy life again. After one night where Marci played a prank on him he started to get feeling back into him even if it was anger. Later he did not understand his feelings for her because he knows he can’t date her because her 4 older brothers will kill him or keep them apart. I really got over the moon that he chose to start dating her even if he knew that her brothers might stop them. They make each other really happy.

The day he got the courage to tell his two best friends (who happen to be her brothers) about it they both told him to break up with her if he knows what’s good for him. He told them he will be with her even if they don’t like it; they brought up his past against him. That day he broke up with her because he is scared that he might hurt her one day. She was hurt and miserable after that but thank goodness he came to his senses after he thought he nearly lost her by her ex “boyfriend” He told everyone in her family about his past to explain why he broke up with her and why he lied to her, how his two best friends used that against him. Her father was really angry at those to and at least they got together again and this book was   a real refreshing book. This is was a real nice novella to read and I would recommend it to everyone to read.

Molly grew up in California but now lives in the oh-so-amazing state of Texas with her husband, daughter, and fur babies. When she’s not diving into the world of her characters, some of her hobbies include hiking, snowboarding, traveling, and long walks on the beach … which roughly translates to being a homebody with her hubby and dishing out movie quotes. She has a weakness for crude-humored movies and loves curling up in a fluffy comforter during a thunderstorm … or under one in a bathtub if there are tornados. That way she can pretend they aren’t really happening.