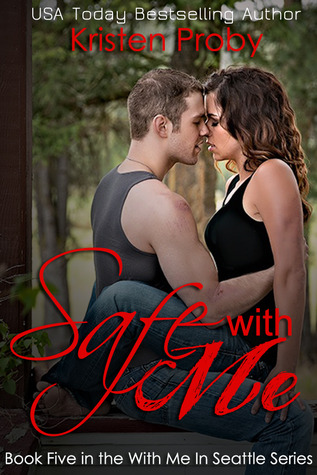 Keeping others safe is what Caleb Montgomery does. He’s never had a problem taking on an assignment, whether it was during his dangerous SEAL days or his most recent job of training war mercenaries. But being assigned to keep Brynna Vincent and her adorable daughters, Maddie and Josie, safe from an unknown threat has thrown Caleb off his axis. Hot for the tall brunette since she came back to town more than a year ago, being close to her day in and day out is cracking Caleb’s resolve to keep his hands off her gorgeous body and his head in the mission.

Brynna is sick and tired of being afraid. All she wants is a normal, quiet life for her and her precious girls. Just as she’s settling into her new home in Seattle and feeling safe again, Caleb shows up on her doorstep insisting the danger is as high as ever. But whether she needs to be sheltered from the threat in her past, or from the intense emotions she feels for the sexy, protective man sleeping in her home, remains to be seen. What will happen if Brynna and her girls fall in love with a man so broken he may not be able to protect them from the danger that threatens, much less himself?”

SAFE WITH ME is the fifth book in the With Me In Seattle series, and continues to follow this tight-knit, loving family through life’s trials and tribulations with humor, passion and everlasting love.

This book was really sweet and amazing. Caleb loved Brynna and both her children and I just loved reading every moment of it. The book melted my heart a few times and that ending was just so amazing and there was lots and lots of love. A very amazing, sexy, hot romance book.

I can’t say that this is one of my favourite book of the series but I really did enjoy it. Kristen knows how to write hot steamy romance novels. The book starts when Brynna is forced out of her town back to Seattle for her safety. She works for her cousin’s husband under the table and moved into Nat’s old house. Matt who is the cop in the story knows what happened so does Isaac and Caleb that’s the only people in her family who knows about it.

After someone started looking and asking questions about the Montgomery family Matt and Caleb thought they are looking for Brynna again so Caleb decided to move into her house with her and her children. Brynna just wanted to feel safe again but it was hard for her when Caleb moved in with her because she liked him a lot and she was lusting for him. He liked her a lot to but he thought she deserves better. He doesn’t think that he’s capable of a relationship; his experiences as a SEAL left him broken and damaged. He doesn’t think that he has anything to offer Brynna or her girls. But that doesn’t mean that he stops wanting her any less.

“God, she can destroy me with just a look. I’ve faced horrors that no man or woman should have to see and faced them without qualms, but this woman and her two daughters bring me to my knees.”

Brynna was a real amazing heroine. She was no pushover and she did not whine when she didn’t get her way and I loved how she handled Caleb and his problems. She was real patient with him and she trusted him and helped him in every way possible and she understood him. Caleb was just pure sex on a stick. Kristen Proby definitely did not disappoint in the sex department. This book was HOT. This book was a real page turner and these two just burned of the pages. I liked that Brynna went after what she wanted and sis not shy away from getting it. I also loved the kids they were adorable and I liked how Caleb was with them.

Now why only for stars? Well for me they just glossed over the danger in the books and I just did not connect that much with Brynna and Caleb. That’s why I give four stars instead of five. . I just felt like something was missing. It seemed like there was all this build up, and then in the end the quick resolution just fell slightly flat. There could have been more danger in it to show that Caleb is good at protecting. What I loved is there was a little teaser of the next book at the end and I really love a dirty and kinky cops.

“I drop my face to my hands and scrub hard.

“Right,” she smirks and takes another bite of brownie.

“Dude, I do!” And just like that, Sam saunters across the room and cups Brynna’s tit in her palm. “See? You have the perfect boobs. Stace, have you felt her boobs?”

Just kill me. Put a bullet in my head and end the agony.

She has amazing tits.

“I wanna feel!” Jules bounces over and joins in.

“Give me more chocolate and you can touch all you want.” Brynna laughs and then glances over at me. “This is the most action I’ve had in months.”

“Is Brynna single?” Mark asks Will.

“Keep your fucking hands off her,” I growl at him before I know what’s coming out of my mouth.

“Hey,” he holds his hands up in surrender and laughs. “It was just an innocent question.”

I love the girls when the drunk I mean they are really funny then. Can’t stop laughing at them with them talking about sex and orgasms and piercings in unmentionable places.  I love this family.